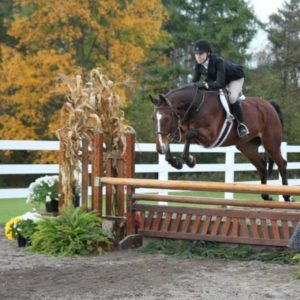 Sara Henry is Shady Dell Stables’ lesson and training program manager.  Sara began riding when she was five years old and was immediately hooked.  She began showing one of her favorite ponies, JD, in the local circuits in the Syracuse, NY area at the tender age of 6 years old.  As her riding career continued, Sara and her athletic thoroughbred mare, Dreams Are Real, enjoyed many achievements including competing at the A and AA rated levels, as well as competing at the prestigious show HITS in Saugerties, NY.  Sara attended Cazenovia College, a private institution known across the country for its unmatched equine education.  She earned her Bachelor of Professional Studies in Business Management with a specialization in Equine Business Management.  While a student at Cazenovia, she competed in the Intercollegiate Horse Show Association (IHSA) Hunt Seat and Western disciplines.  Sara had the privilege of riding in an advanced jumpers class under Amy Sherrick Von Schiller throughout her last year at Cazenovia.

Sara continues to enhance her riding and training by participating in and auditing clinics throughout the Northeast, including New York, Pennsylvania and Maryland.  She has had the opportunity to work with Todd Fromme, Jimmy Wofford, Ann Fowler, Steuart Pittman, Frank Madden, Shane Ledyard, Patrick King, and George Morris.

We are proud to have Sara manage our lesson and training program at Shady Dell Stables.  We believe her equine knowledge, experience, and passion enhance our offerings to our boarders and students, making Shady Dell a unique boarding and lesson facility in beautiful South Central Pennsylvania! 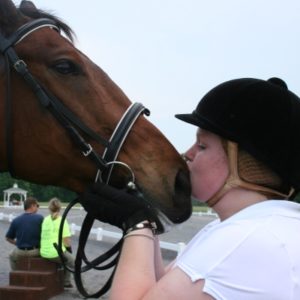 Hayley began riding at 8 years old with Debra Wilcox at Hillcrest Stable in Riverhead, NY.  She began instructing in her early teen years and started teaching for Ms. Wilcox on a regular basis.  Hayley’s students attended many local shows throughout Long Island, receiving numerous series end awards.  During her time at Hillcrest, Hayley showed extensively throughout Long Island in dressage as well as hunters and equitation.  In 2005 and 2007 she attended the New England Dressage Association’s Fall Festival, complete with a few first place wins.  In 2007 under the sponsorship of the Equus and Equestrian Sport Foundation, Hayley qualified for USDF Region 8 Championships at HITS in Saugerties, New York.  She was also named Rider of the Year and received a high score award from the Long Island Dressage and Combined Training Association.  In 2007 her mount Schatzi received a Horse of the Year award from the United States Dressage Association.  In 2008 Hayley debuted her own Oldenburg gelding, Alabaster II, in third level, and received various year end awards in hunters and equitation. She has had the opportunity to work with a range of clinicians, such as Anne Gribbons, Scott Hassler, Monica Theodoresceu, John MacPherson, Laura Bowery, Brendan Curtis, Julio Mendoza, and Britta Jonston. In 2010 Hayley relocated to York, PA to pursue a business degree at Penn State York. Hayley was quickly drawn to Shady Dell Stables and joined the team as a riding instructor in October of 2010.  Hayley obtained her business degree in 2014 and works full time in the business world.   Hayley continues teaching lesson students every week, and she enjoys working with her horse, Arrow Von Henry, a talented Quarter Horse gelding she purchased from the Henry family.  Hayley and Arrow made their dressage debut in May of 2012, winning a Year End Champion Award from the International Equestrian Organization.  We are proud to have Hayley a part of the Shady Dell team!